My memories of that day in 1963 are disjointed and spotty.  About what you would expect from a 7-year-old, who was too young to grasp the significance, the gravity of what had happened … A child too innocent to realize how harsh the world could be.

I was barely aware that John F. Kennedy was President.  My appreciation for what he meant to the country politically or to my Irish-Catholic parents culturally was lost among the toys and activities of a sheltered childhood. 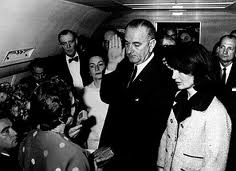 Lyndon B. Johnson
takes The Oath of Office

I can remember sitting in Sister Ann David‘s first-grade class at the Immaculate Conception grade school on Chelten Avenue in the East Germantown section of Philadelphia, PA.  It was nearing lunchtime.  I had yet to completely synchronize my internal clock to the rigidity of your typical Catholic school day.  So I was constantly counting down the minutes to when I could leap from my seat (single file line, of course!); grab my lunch; then run around the schoolyard until the interminable afternoon session began.

The first announcement was sudden and confusing.  Something along the lines of “Please say a prayer, the President has been shot!”

Then several minutes later the statement – much more subdued and unrushed than the first – resulting in days of dread for those older than me, including those selfless Sisters of the Immaculate Heart of Mary … 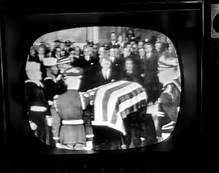 “The President is dead.”

Much of the rest of that morning is lost, that is until I got home early that afternoon after a hurried dismissal.

The oddities in a chain reaction, started on an unknown street in Texas, rippled for days through the country and the rest of the world like a rock that’s dropped into a still pond.  Our home was no different.

Coming home to find Mom on the living room couch, tears in her eyes, hand to her mouth as she watched the small black and white TV.  Dad coming home from work at the steel plant early and joining her in front of the TV – before even showering – for what seemed like hours.  Watching unfolding scenes from Dallas, Washington, D.C., and Philadelphia.  Mom beside herself; Dad comforting her with that dazed look on his face.

philly.com: When TV discovered what it could do

Days where even the slightest sound or disturbance would illicit an urgent ‘Shhhhh …!” or a more comforting invitation to watch with them something I could not quite grasp.  A nighttime broadcast of an airplane, a hearse, a coffin on a high lift, groups of solemn people, a woman named Jackie, a new President …

Even in my child-eyed innocence I knew something profound had occurred … something ominous, unexpected, and shocking to every adult I saw.  You sensed their disbelief, their anger, their mourning.

They tried to explain what had happened, to whom it had happened, and why it was so incredibly sad.  You tried to understand.  You stayed close to your parents because you could feel an overwhelming sadness coming from them.  As a child, it was unsettling.

For four days our little world among a small strip of working-class homes revolved around a tiny TV set.  Back then this was an extraordinary exception to normal life.  I struggled to make sense of the images. 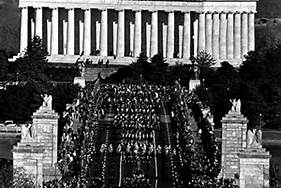 A closed casket sitting for days in front of a ceaseless procession of everyday citizens and dignataries, a parade like no other you had ever seen … a riderless horse, a two-piece caisson, funeral dirges in lieu of John Phillip Sousa marches, a church funeral service shown live on TV, a little boy caught in a child’s salute, something called an eternal flame …

At some point, it seemed like everything went back to normal, although I doubt any of those people I had seen or stayed close to over those four endless days ever felt that it did. 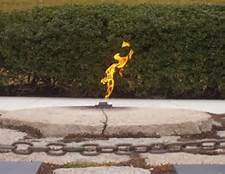 4 thoughts on “That day in November …”