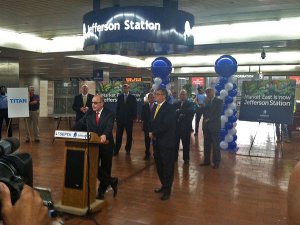 The acquisition has become quite commonplace in recent years, from sports stadiums and entertainment venues to infrastructure basics like roadways and railway stations.  Naming rights, long reserved for notable philanthropists placing a family name on hospitals, university halls, museums and libraries, are now a convenient – though costly – method to promote brand recognition and consumer confidence.

Earlier this month SEPTA announced the naming of Market East Station to Jefferson Station in a deal between the regional transportation provider and the Jefferson Health System.  Thomas Jefferson University Hospital is only two blocks south of Market East.

The naming deal follows an earlier arrangement to rename the Broad Street Subway station at Pattison Avenue “AT&T Station” and previews a future naming rights deal with their Verizon or Comcast for Suburban Station.

Facility naming deals are an easy way for cash-strapped or opportunistic entities to raise funding from wealthier, healthier corporations.  In the overall scheme of things, it’s a no-brainer for a constantly short-funded regional utility, like SEPTA, to use its captive commuter audience as a way to raise needed capital.

But what of a hospital spending $4 million to buy branding rights all in the name of product recognition?  To me, it speaks to several interesting questions and one Big Duh observation.

First off, the obvious question … Is it prudent, necessary or progressive for a medical provider to seek publicity of this sort at what most would consider a sizable chunk of cash?  Arguments could be made that such attempts at name recognition promote Jefferson as a top-class service provider, educational institution, and research facility.

Yet, I would think that’s a tough nut to crack since Jefferson is already a renown regional name.  Once you get outside the Philadelphia region it’s hard to figure exactly what naming a railway station adds to the Jefferson brand.   How many prospective medical students or established medical professionals would actually be swayed by a name on a subway marquee?

They might even look at such largesse as a needless and wasteful expenditure in a research-heavy profession where funding often determines how much a dedicated research professional can accomplish.

On another level, it’s difficult to ignore what equipment, expansion of service, or community involvement could be financed with that $4 million marquee grab.

Jefferson’s argument might be that all testing, diagnostic and treatment equipment is sufficiently updated and in top-level performance condition.  Yet I would be willing to bet you can find a few areas of their network that might very well be begging for additional investment, updating, and manpower.  From that point-of-view, buying a railway station would seem like an unnecessarily extravagant expense to anyone who consumes Jefferson medical services. 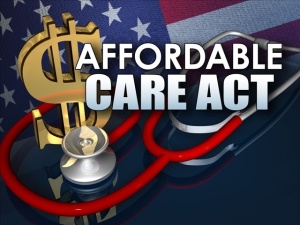 Affordable was supposed to be the key word …

My Big Aha Moment was in the realization that if the Jefferson Health System has $4 million to spend on a subway station, they certainly have a lot of other money available for a lot of other non-medical investments!

This is not an attack on JHS alone though.  This I’m certain is the same financial truth that can be found in any large, successful medical system, be it in Philadelphia or Dallas or Nashville.  I have never hidden my contempt of the ACA, mostly because of the way it was birthed … forced in hurried fashion through a brow-beat Congress.  And as “healthcare reform” it wasn’t real reform at all … Not even close in any way, shape, or form.

Real healthcare reform would have addressed the REAL problem with healthcare … The Cost!  All the SEPTA-JHS deal did was highlight the crux of the healthcare problem … Medical services that are so expensive that a hospital has a few million lying around to buy a subway station name.

All the ACA did was dump more people into a system that costs way too much.  Logic would dictate that if you want to provide medical coverage to more people the trade-off should be reducing the costs – if at all possible – of the services to be provided.

Can anyone imagine saying that medical costs in this country were affordable prior to the passing of the ACA?  Obviously not, since “Affordable” was the first word they thought of when they created the Affordable care Act!  Yet no significant action was taken to make healthcare more affordable prior to adding millions to the Well-Care portion of U.S. healthcare (i.e. that segment of healthcare that the uninsured COULD NOT AFFORD to use, resorting to Emergency Rooms as their sole source of healthcare once they became sick).

Wouldn’t it have made more sense to take a long, deep look into the cost structure and profit margins of American healthcare BEFORE adding a significant new market for services that would only see demand and usage skyrocket with the passage of the ACA?  Would it not have seemed a reasonable approach to restructure medical costs in a way that potential savings might have paid for many new ACA subscribers?

The SEPTA-Jefferson Health System deal suggests that it would have been on both counts.  Not that we were ever given the chance to find out …

Well, health and maybe a good game of railroad Monopoly …