Lost weekends occur for a number of different reasons, many of the reasons bad.  Much of our September 15th weekend in Williamsport was lost in a blur of wedding activity, waves of emotion, and the excitement of having so many people – important to us – celebrating alongside.  It was a weekend we had waited so long for, yet in the moment we were simply swept away in an emotional tsunami.

There was – or so I’ve been told – copious amounts of fine spirits, some wacky dance moves (Guilty as charged!), and a DJ that could be heard in State College.

There was one bizarre episode … involving a diabetic dog … a six-hour lap to the Philly suburbs and back … and one pissed off FoG (Father of Groom) at 0630 hours Thursday morning. Yet, I was proud I even answered Carol’s cellphone even when I KNEW – deep down – it was Disaster calling.  Older dogs – like aged parents –  do not like disruptions to their routine or their surroundings.  And no, best not ask me WHY we had to go all the way back.

The real fun started Thursday night with the kind of scene fathers and mothers spend their lives working for and long remember when – and if – they occur.  A chance for just our family and Mike’s soon-to-be, Janelle Lynn to have a quiet dinner with a few close relatives.  We took the opportunity to welcome Janelle to the Shortall family.  (She’d been warned a few times in the past.  This was her last chance!)

But for Carol and me, the highlight of the night was being able to look across the table at the three men we raised and what – to this point – is the fruit of all those efforts.  The scene was much warmer and satisfying than words can describe.  And yes, I’m probably over-dramatizing a bit; but for me, it was a fantastic feeling.  Being together in one place just doesn’t happen as much as it used to.  And being able to look across the table at three upstanding young men was enough to give both of us the kind of feedback that says … Hey, we did alright!

On Friday, the really serious prep work began with the pre-positioning of supplies for the reception, including the aforementioned copious amount of booze along with linens and decorations that would take into the wee hours of Saturday morning to install once the rehearsal dinner was concluded Friday night.  The Pennsdale Civic Center, a nondescript but roomy community hall, was the venue for Saturday’s reception.  The bride’s family took responsibility for transforming The Center into an appropriately decorated wedding hall.  And they did an exceptional job that included an elegant, lighted backdrop for the head table and wood-framed lighted columns that marked the corners of the dance floor. 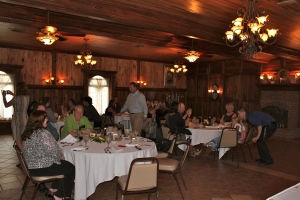 Rehearsal dinner at The Valley Inn

Our turn – as the groom’s family – came Friday evening with an excellent meal following rehearsal at The Valley Inn in Duboistown, just across the West Branch of the Susquehanna River from Williamsport.  The Valley Inn offers little to impress from the outside, aside from its intricately carved woodcraft sign.  But the sign itself gives just a hint of the carpenter’s treasure inside.  The amount of intricate woodwork throughout the establishment is enough to cause even the most experienced craftsman’s jaw to drop.  And besides all that intricate woodwork, it also houses its own microbrewery, Abbey Wright Brewing Company.

Our meal for roughly 40 people was nothing short of impressive.  The food – though simple – was well-prepared, delicious (The garlic mashed potatoes were a HUGE hit!) and well-attended, not only by a sharp, quick-serving staff, but also by proprietor, Jim Wright, who was there to make sure our party was a hit!  I would highly recommend The Valley Inn should you be in the Williamsport area, looking for a quiet dinner or a venue in which to hold your next party or event.  (The sports bar is not a shabby place to hang out either!)

Saturday – of course – was The Big Day!

Janelle, the bride chose yellow and a deep pink as the Colors of the Day, with the groom sporting the first Calla Lilly buttoniere I recall ever seeing.  The ceremony was bright and joyous, and officiated most appropriately by Msgr. McGouth at St. Lawrence’s R.C. Church in South Williamsport.  The happy couple seemed happiest when they exchanged vows on the First Day of the rest of their lives.

After pictures at the church and atop a scenic hill owned by members of the bride’s family, it was off to the reception.  One of the proudest moments of the day, besides watching my oldest son take his vows, was enjoying the sight of Mike dancing with his mother in the obligatory mother-son dance. 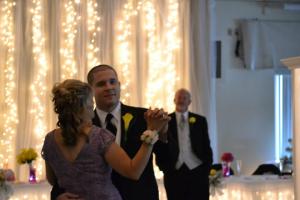 There’s a certain pride one feels when the mother of your child expresses her pride and – in a symbolic expression – recognizes that in no small way her relationship with her son has changed.  The change can be fraught with uncertainty, maybe even a touch of nostalgic longing, but it need not be a source of anxiety if the bond is solid and the love is strong.  From where I stood at that moment, there were no doubts that their relationship will be as vital as it was when Michael was but a wee lad.

After ironing out a few complications with the liquor supply (Don’t ask!  But a tip-of-the-glass to Vince, Bob and Steve for the Save!), it was time – finally – to relax.  Yes, there might have been a touch too much “relaxing”; but what the heck, it had been months of preparation, emotional reflections, and nervous energy.  Something had to give, and it gave in a big way!  There are – no doubt a few incriminating photos floating around on the internet, and I have but one defense … It was Party Time! 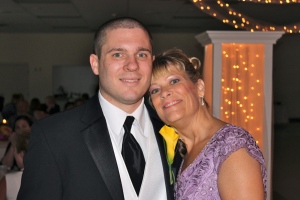 It was – in the end – a day and night to remember.  The newlyweds, who will not be taking their honeymoon until later, had a wonderful send off into married life.  Their parents – if I may be so bold – did an outstanding job of ensuring their most important life event to date was a rousing success.

The Shortall entourage of family and friends had a wonderful time, and came away with very favorable impressions of the Williamsport, PA area.

Weddings can be glittery, elaborate, painstakingly stage-managed affairs.  They are all unique in their own ways and, if done correctly, reflect the personalities of the happy couple.

In another sense though, weddings also provide a foundation for the inevitable challenges and difficulties these intertwined lives will face on their journey as a couple.  The Foundation is represented by all those friends and family who surround and support the newlyweds on their big day.  Because even as they party and celebrate the new union, there is an unspoken promise to be there when times get tough; when advice is needed; or even just to listen.

The Irish have a blessing that goes like this:

May the road rise to meet you
May the wind be always at your back
May the sun shine warm upon your face,
The rains fall soft upon your fields
And until we meet again
May God hold you in the hollow of His hand.

The blessing invites one to understand the journey of life.  It offers the hope that life’s travels will be easy, fruitful and safe from pain.  The concept of the rising road sets forth the hope that the road through life will take one into higher and higher levels of personal and spiritual development.

From the look of things during that Lost Weekend in Williamsport, Janelle and Michael will face no shortage in those who care most deeply for them and who truly wish for the best in their lives together.  And you can’t ask for anything more than that!

One thought on “Lost Weekend in Williamsport”