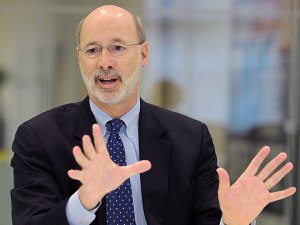 Pennsylvania Governor Tom Wolf has followed up his first blundering month in office with something a bit different …  Putting a stop to all forms of disagreement from within the Executive Branch of State Government!

Of course, when this happens you must have that first sacrificial lamb; and that lamb was the unfortunate, now former Chairman of the Philadelphia School Reform Commission, Bill Green.

Green was quickly and unceremoniously dumped from the chairmanship last week by Tom Wolf, The Terrible for crimes against the State, Education, and children of all ages.

His crime?  Disagreeing with Tom The Terrible (aka Triple T) on charter school applications in the Philadelphia School District!

You see, Triple T wanted the SRC to deny completely any and all applications for new charter schools in the beleaguered Philadelphia School District (PSD) for which the SRC has maintained oversight since December 2001.  The SRC resulted from frequent turmoil over school funding and poor performance, finally provoking the State to take over the schools.

Over the years, the situation became so bad in the school district that parents clamored for choices and a way to ensure quality educations for their children.  Part of the answer became privately run charter schools.

Charter Schools are independently operated public schools that are funded with federal, state and local tax dollars.  These schools are established to provide families with more educational alternatives for their children. Charters are non-profit, non sectarian, organizations that are approved by the local Board of Education   (the “authorizer”) or the State Appeal Board. Each charter has its own Board of Trustees and administrative staff and operates as a separate, independent  local educational agency (LEA) within Intermediate Unit 26 (IU 26).  The Pennsylvania Charter School Law – Act 22 of 1997 – set up charters to operate free of many of the local and state requirements that apply to traditional public schools.

Bill Green
He never had a chance!

The problem for the PSD is that the district – any school district, since charter schools are found throughout the state – must apportion any funding it receives to any charter school that enrolls district students.

Disagreement abounds about exactly what that cost is.  Current requirements state that a charter must be funded to $2000. per child enrolled.  The PSD asserts that the cost to the District is closer to $7000., but support for the figure is questionable.  Currently, the PSD faces an $80 million funding shortfall.

All this led to Triple T insisting that the SRC not approve ANY new charter school applications, despite parent pleas for more choices from even more charters, so long as they were properly overseen and provided quality education opportunities.

In February, faced with 39 applications for new charter schools, the SRC approved 5.

Many were disappointed in the SRC’s conservative approach.  Many expected 21 of 39 approvals.  Some were pushing for all 39!  The SRC approved 5.

No one was happy.  Not the Parents, not the State Legislature, not the school district.

Apparently Triple T was apoplectic!  So, just days later Triple T swung his mighty claymore and dislodged the Head of the SRC.

Of course, the demoted – though yet to be completely vanquished – Bill Green should have seen this coming for miles from across the moor.  He should have seen Triple T’s armies amassed in the foggy distance.  Mighty steeds puffing hot breath in the cold, damp morning air.  A vista of cold steel held aloft by the minion army gathering and peering towards his vulnerable redoubt.

Or he could have just asked Eric Arneson, vanquished appointee to the Office of Open Records!

Those minions off in the distance?  Nothing more frightening than the Philadelphia Federation of Teachers!

You see, Triple T’s power – as a Democrat – rises and falls with the fortunes of public unions.  This is why Pennsylvanians will not see much-needed initiatives to quell the Public Pension problem from Triple T, nor changes to the anachronistic system of State Stores in the distribution of liquor products.  But you will see plenty of tax increases to keep the minions happy, their horses mobile!

Triple T needs them!  He needs them badly!  And he will behave badly if it means keeping the minions in truncheons.

Perhaps the darkest visage however, delivered by that terrible swift Triple T sword, is that our state employees, managers, directors and commission members have now gotten the message.  Don’t cross the boss …

Not even when you are certain he is wrong … No matter how much experience, expertise, and value you bring to your job.  Don’t even suggest that your boss, Tom the Terrible, might be wrong.

You may just lose your head!

7 thoughts on “Tom Wolf, The Terrible”