In 2011 Carol and I trekked to Southern California to celebrate my brother, Pat’s retirement.  We spent a significant part of our trip pursuing our primary objective … several days of golf and touristy behavior within and about the Pebble Beach resort on the Monterey Peninsula.

That required a good bit of road travel between the Los Angeles area and Carmel/Monterey.  One of the impressions from that journey was the exponential growth in vineyards well south of Napa Valley – the commercial heart of California Wine Country – since our previous trip to the Left Coast about 12 years earlier.

On past trips to The Golden State we never took the opportunity to enjoy California Wine Country.  Counterproductive it would be to enjoying a fine winely glow, when dragging one’s underage kids around with you …

Now our kids are grown … and as luck would have it one of our Shortall (West) nephews was taking the marital plunge with the festivities taking place in Temecula, California.  Sixty miles north of San Diego and ninety miles south of LA, Temecula touts itself as the center of California’s South Coast wine country. 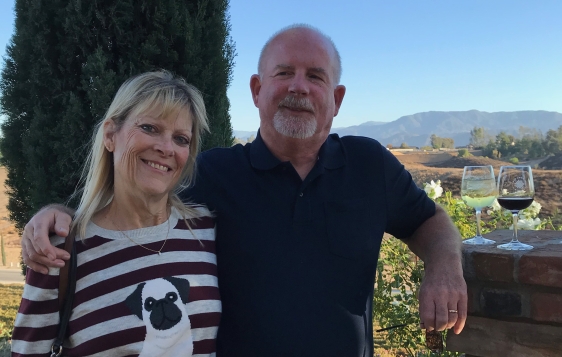 The vino was superb that day, my friend …

Temecula was untouched by the wild fires that hit parts of Napa prior to and during our December 2016 trip.  In early December the Thomas fire, one of the largest in California history, began in the hills near Ventura.  Smoke from those fires were clearly visible throughout our trip.

With both families established California locals, this was not much the “destination weddings” for them, but for us refugees from a rapidly winterizing region of the mid-Atlantic coast, it was Destination enough!

The happy couple selected the Mount Palomar Winery as the site for their forever nuptials.  And frankly, it was quite the venue!  The scenery from atop the hills on which the main event took place was spectacular.  For a late afternoon ceremony followed by drinks and hors d’ourves set close to the ceremonial stage, one was treated to beautiful daylight vistas, a spectacular sunset, and as night fell, an immensely large and vivid moon rise over distant mountains!

This wedding venue rivaled the trip we took to the beaches of Nags Head, North Carolina for another family wedding.  Both venues were spectacular in their own right.  Comparisons are unfair due to the dramatic difference of each location; but no one can argue that each made their respective affairs indelibly memorable!

Mount Palomar provided a hilltop venue for the nuptials, which included a screen-saver background of a gorgeous Southern California day with the surrounding hills in the distance.  Afterwards, guests took the opportunity for scenic photos while snacking and imbibing the local vintage in salute of the happy couple.

The post-wedding reception was held in a spacious barrel room, the party surrounded by racked wine barrels (attempts to tap several failed).  A setting unlike any other wedding we have attended.

And yes, the food was as good as was the wine!

Add in the opportunity to spend an extended vacation with close family and squeeze in a Philadelphia Eagles game (December 10) against a strong Los Angeles Rams team, and you have what was likely the BEST destination wedding I can remember! 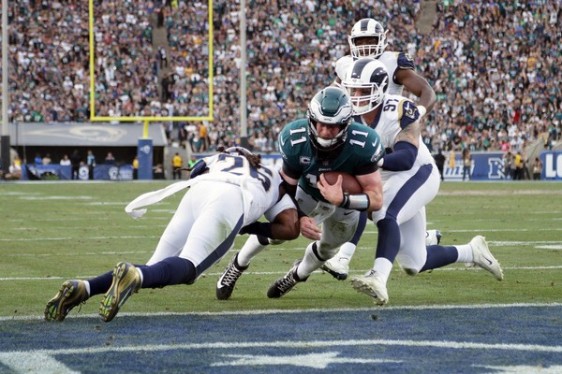 The play that could have cost Philly a SuperBowl! (Apologies for the gratuitous football reference …) 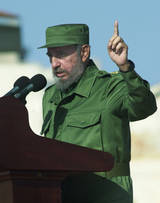